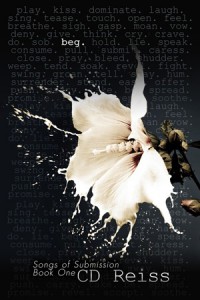 “I had him. All I had to do was slow down and tease him so close he’d beg me to finish him. But he put his head back and looked at the ceiling, groaning deep in his throat. It was such a position of surrender, I couldn’t do it. I couldn’t stop. I was going to make him come way before he begged.”

Okay…so, yeah, it’s been a while since I have read such beautiful writing. CD. Reiss has me hook on her writing, I can say that much.

I have been searching for a story like this since FSOG. While many people had found their FSOG hangover fix in the Crossfire series, I didn’t. While I did enjoy that series to an extent, for the most part, it annoyed me. I hated the way Gideon talked…and…For fear of being lynched, I won’t hate on GC much further.

This, though, is the fix that I never found, until now, and I am finally glad I did. I gobbled this up in one sitting and am begging for more.

HOWEVER, I am going to take my time with series and read other books in between, because I don’t want it to end too quickly for me. I learned my lesson with FSOG, I read that trilogy wayyyyy too fast and then there was this huge hole that it left inside me that no other read could fill, so I ended up ordering the audio books to listen to it again. Ha!

I recommend this book to anyone who likes…these kind of stories. The only reason I am giving it 4stars is because Drazen is described as having red hair and copper-colored eyelashes and freckles on the nose…wha?

I’m sorry, but, tried as I did, I couldn’t picture a red-haired guy who was hot, and that sort of messed with the level of enjoyment for me…
THEN there was a mention of him being Irish or something of that sort, and my mind catapulted back to that scene from Hall Pass. Yes, that scene!

BUT, that’s just my personal preference. If ginger-heads floats your boat, by all means, have at it.
I like ‘em anywhere between caramel and dark-chocolate anyways, so…neva mind me.

Anyway, I loved this, and will mostly definitely be dabbling in this series at snail's pace to enjoy every second of it. I’ll just paint my own picture of Jonathon Drazen as I read along.

A good read on goodreads.